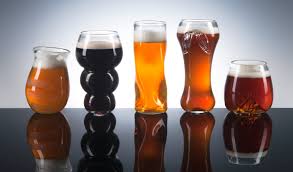 There is a wide variety of beer glassware available for you to choose from, and they each have their own unique characteristics. In fact, some glassware is designed specifically to help preserve the foam head of your beer, while others are designed to help enhance the colors of your brew. It’s important to remember that it’s more than just a glass that holds your beer; it’s a delivery mechanism that brings out the unique flavors, colors and aroma of your favorite beer. The type of glass you use has the ability to make or break your overall experience.

Here is some of them…

The beer mug is incredibly robust, easy to use and holds a lot of beer. Common in England, Germany and the United States, this type of beer glass comes in all sizes. 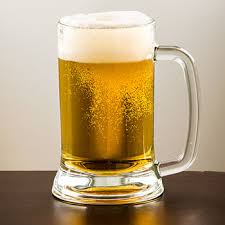 The main characteristic of the beer mug is its wide cylindrical shape with a handle on the side. The thick glass walls helps insulate your brew to keep it cool, while the handle helps prevent your hands from inadvertently warming up your beer (or dropping it when you’ve had too many).

Sometimes beer mugs will have dimples throughout the glass. While most believe this is merely for decorative purposes, others argue that the dimples help a drinker appreciate the overall color and clarity of their beer.

No matter what you believe, there’s no denying the popularity of this beer glass. They’re easy to use, strong enough to toast your friends in a hearty manner, and it holds plenty of beer!

The beer stein is very similar to the mug. In fact, so common that these two types of beer glasses are often confused as the same, but they are not. While they have the same shape, steins come equipped with a hinged lid and a lever for your thumb to open said lid easily. Additionally, steins are traditionally made out of a wider variety of materials, including porcelain, stoneware, pewter, silver and wood. 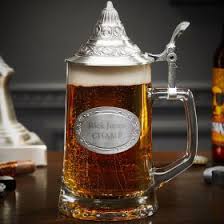 ’Stein’ is an abbreviated form of Steinzeugkrug, the German word for stoneware jug or tankard. Historically, steins were preferred because it was widely believed the lids were more sanitary and would ultimately prevent the bubonic plague. In fact, in the early 16th century many communities throughout Europe had passed laws requiring food and beverage containers have lids.

While beer steins are still commonly used today, they are mostly regarded as ornamental or souvenir glassware amongst the majority of beer drinkers. Most people prefer the convenience of a pint glass, over the traditions of a stein.

Pint glass is probably the most common glass for beer. This is the glass that you will likely be served in a bar or restaurant. Pint glass has a simple and somewhat skinny cylindrical shape that gets wider as it goes up. This type of glass is common to use with most type of beers, including lagers and ales, as well as other styles such as IPAs, stouts and porters. 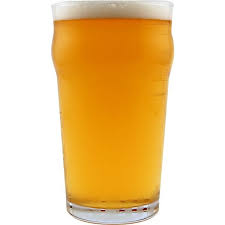 The English pint glass, also commonly referred to as an Imperial or Nonic glass, is shaped much like the American pint, but has a slight lip near the top. The English pint also holds 20 oz. and is usually preferred for drinking English ales and lagers.

This type of glassware is cheap to manufacture, cheap to buy and easy to drink out of. Bars love to stock the pint glass because they’re easy to clean and simple to stack. All of which is probably why it’s the go-to glassware for most beer enthusiasts.

Weizen glasses are often confused with pilsner glasses, due to their similar shape and size. The main difference between these two styles, is that the Weizen glasses have more curvature to them, especially at the top of the glass. 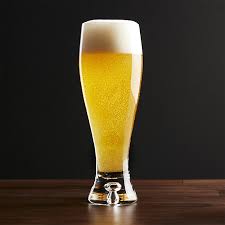 Starting with a strong, narrow base, the glass has a distinctive curve to it as it goes up. This type of beer glass is much taller than a pint glass, and usually holds at least ½ a liter of beer.

Another important characteristic, weizen glasses are designed for and primarily used for wheat beers (Weizenbier). The curved lip at the top of the glass helps trap and encourage a thick foam head, allowing for you to appreciate the full aroma and flavor that comes along with wheat beers.

However, be wary of the fruit that is usually served on the rim of wheat beers, especially at bars, as the acidity and juice of the fruit could destroy the foam head.

Another popular beer glasses to try out are the Tulip glasses. Designed to trap and maintain the foam head, the tulip glass helps enhance the flavor and aromatics of hoppy and malty brews. These types of beer glasses have a small stem and footer with a unique, tulip-like bowl on top. The top rim curves outward, forming a lip that helps ensnare the foam head. 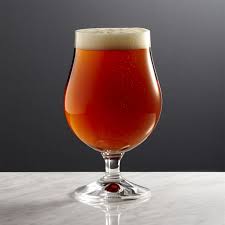 The tulip glass is commonly used for stronger brews, such as Double IPAs, Belgian ales and barleywines.

The bulb-like bowl allows you to generously swirl around your beer, releasing the full aromas. This is another type of beer glass that is a popular amongst beer geeks.