Your home brew has a shelf life and depending on how you store it, that shelf life can be shortened or lengthened. As you have invested time and effort to create a beer in the first place, it would be nice if you can keep the beer tasting it’s best for longer. Hopefully though, it won’t last too long because it tastes so good you can’t stop drinking it.

Now when I say shelf life, I don’t mean a “use by date”. There are no pathogens or microbes that are harmful that can survive in beer.

What I mean is that the flavour, tastes and aroma that you have in a beer. We want to preserve these flavours and aromas for as long as possible. We want a beer that was brewed a few months ago or even years to have a much more full and vibrant flavour.

A beer that that has been stored in less than ideal conditions will deteriorate a lot quicker.

Most of this article is focused on bottle conditioned beers that you may want to store for longer than 4-6 months. A beer in a keg will last a long time and the freshness or stability is affected by the same factors as bottled beer. As a vessel for aging beer though it’s not ideal because of the size and it’s not an economical choice. 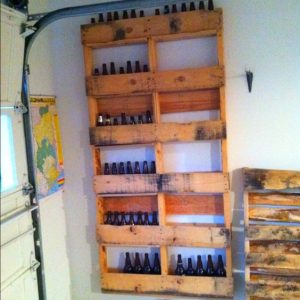 Factors such as oxidation that can be introduced during the process of brewing and can contribute off flavoursto your home brew that aren’t desirable.

Oxidation is a chemical reaction that occurs in the beer and these reactions are accelerated by temperature and movement. For this reason you should store the beer cool.

Good siphoning technique and transferring the beer without introducing air is important. This will keep oxidation at a minimum.

Like most consumables keeping beer cold will prolong its freshness. Even if this is only a few degrees below room temperature it will help. In most cases you can keep beer in the fridge and with light beers and lagers this is a must. If room is an issue then storing beer in a cold room of the house or a garage depending on the climate will be fine.

To test this out keep a couple of your home brewers in differing conditions. Store one in the fridge and the other in a warm place. After a month put the warm beer in the fridge and when it’s cold try both beers side by side. You will most certainly taste the difference.

This is pretty simple. Your home brew will have a small amount of yeast or sediment. It will settle out over time so you want it to settle to the bottom of the bottle not all the way up the side. When you pour your beer you want the sediment to remain in the bottom not for it all to pour out with the beer.

Keep it in the Dark

Exposure to light is another problem of keeping your beer at it’s best. Beer that has been stored in the light has a term to describe it called “skunked” so you know it’s not pleasant. When you bottle your beer it’s best to use brown bottles if you can as these will let the least amount of ultraviolet light in. Green and clear bottles are the worst choice and should be avoided if you can. 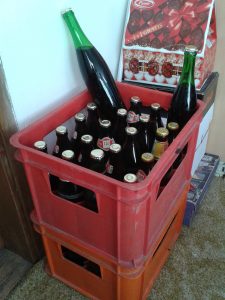 Keep your home brew covered either in a box or a cupboard so no light can get to it is another easy solution to avoid this simple problem.

What Kind Of Beer Is It?

Some beers will age better than others. It’s important to take this into consideration when deciding whether to age a beer or not.

Generally, hoppy beers will lose their hop aromas over time. There have been a number of releases of commercial beers that have deliberately short shelf lives because of this reason. Stone Brewing, Enjoy By and Brewdog, Born To Die are examples of these kinds of beers.

If you brewed a beer that is all about the hop aromatics it’s best to drink these fresh. The fresher the better.

On the other hand, you have malty beers and high ABV beer that definitely need aging before coming into their own.

Time allows the malt flavours to merge and even gain some complexity. The alcohol content also mellows and evens out.

Once again sanitation is everything in home brewing. To have any reasonable shelf life the beer needs to be brewed in a sanitary way.

When you age beer it allows contaminants time to develop. If there are any microbes that produce lactic acid (lactobacillus or pediococcus) these can begin to appear at around 1 – 2 months after packaging.

If good sanitation practices are followed this shouldn’t be a problem at all.

When you bottle or keg your beer, unless it is filtered there will always be a small amount of yeast sediment that settles in the bottle.

This is fine and not a issue unless there is a lot. You should be aiming for a small coating of yeast in the bottle not more than 1 mm thick if possible.

The problem with having lots of yeast in the keg or bottle is that it will eventually die and starting breaking down in the beer. This is called autolysis and is fine in small amounts. Champagne can often have this flavour and it’s part of the taste which people like.

In large amounts but it can taste like marmite or soy sauce which isn’t a great flavour to have in your beer.

This breakdown of the yeast happens after several months so is not a problem in fresh beers that will be drunk soon after brewing. In aged beers though it can bring about unwanted flavours so is best avoided.

Patience is key here. Wait for the yeast to flocculate down after fermentation ceases for 5-7 days. This means there is less yeast in suspension when it comes time to package. Again careful transfer of the beer before bottling or packaging picks up less yeast to settle into the bottle.

Hopefully these few pointers will help you out. Ultimately though your home brew lasts as long as you think it tastes good.