Here are some tips to move you forward along the path to better beer.

Experienced homebrewers can be a bit snobbish about all-grain brewing. It’s true that building a beer from the malt up gives you finer control, but it’s wrong to assume that extract brewing produces inferior beers. Ignore the attitude. Quite a few brewers never make the leap to all-grain, and they still produce some great beers. How do they do it? The same way we all do: they learn the ingredients and hone their process. Here are some tips to move you forward along the path to better beer.

The first tip is pretty obvious: remember to stir the wort as you add the malt extract to avoid scorching it on the bottom of the pot. Extract is denser than water, so it naturally sinks. Combine that with a high energy propane burner and it doesn’t take long to caramelize and then burn to a sticky, ashy mess. I’ve seen beginners so focused on getting all of the extract into the pot, that they don’t notice a problem until they’re scraping up the scorched mass at the end. 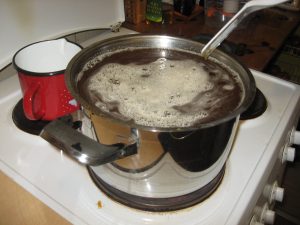 Adding the malt extract as you stir can be a bit of a juggling act, but the key is not to rush. Get the water moving first, then add a portion of the extract and resume stirring. It also helps if you you take the time to warm up your liquid malt extract. At room temperature, it’s thick and viscous. Give the cans or buckets 20 minutes in a warm water bath(150-160°F/65.5-71°C is good), and the extract will be thinner, easier to pour, and quicker to dissolve.

Stirring is also important when using dried malt extract. In that case, the primary issue is clumping, but those will also sink to the bottom, causing similar problems. Take your time mixing your extract in and you won’t need to worry about losing fermentable sugars or introducing off flavors into your beer.

A good boil is a key part of the brewing process. It kills off any bacterial competition for the yeast, but it’s also useful for extracting hop bitterness, driving off DMS and precursors, and clarifying the beer by coagulating proteins. Most recipes call for a 60 minute boil with several hop additions along the way.

Some brewers advocate a shorter boil to save time and propane, especially if the recipe only calls for late addition hops or whirlpool hopping. That can work out fine, but it’s best to boil for a minimum of 20 minutes to sanitize the wort and get a decent hot break to clear proteins.

Another big question is whether to do a partial boil or full-volume boil. A partial boil is easier, because you don’t need as large a pot and it’s quicker to cool down, especially if you top it off with cool water. A full-volume boil, on the other hand, offers more efficient hop extraction and is less likely to darken the wort. In general, it’s better to invest in a larger pot and a wort chiller to support full boils.

Step Away From the Kit

Beer kits are great for beginners. Although you can still get single can hopped extract kits, the better ones come with unhopped extract, real hops, and maybe some specialty grains. When you’re starting out, kits can teach you about beer styles and the base ingredients. Even as you develop more experience, there are still some good reasons to use them.

But pre-packaged kits or copying other people’s recipes are like training wheels, they keep you on track, but limit your growth as a brewer. Take small steps first; try improvising with the kit. Add raspberries to a Scottish ale or transform an IPA into a double IPA with additional extract and hops. As you learn, you’ll get more confident in coming up with your own recipes.

Specialty Grains are Your Friend

As I mentioned, many kits come with specialty grains to steep before the boil. Those malts add color, flavor, and mouthfeel that are tough to get from extract alone. Follow the kits’ example and integrate fresh malt into your recipes. That seems obvious in malt-centric styles — you’d be hard pressed to make a good extract stout without some roast malt and chocolate malt — but it makes a difference in hop forward beers, too. A bit of crystal or biscuit malt in an IPA adds malt complexity to better support the hops.

Using specialty malts is easy. Look at kits or extract recipes for ideas on which malts will fit the beer you’re brewing. Crush or grind them and place them into a small nylon sack. As you’re heating your brew water, drop this malty teabag in and let it steep until the water is close to boiling.

Keep Calm and Brew On

Don’t fall for the snobs’ trap. By all means, move into all-grain if you want, but extract brewing is real brewing. Making fine beer is rooted in good experience matched with solid process. Keep improving both!